Many people of the idiotic human species called " Arjuna fans" claim that while Arjuna defeated Drupad, Karna was badly defeated by Drupad. This has gone viral and became a strong MISCONCEPTION. The fact is that when Karna faced Drupad, he defeated him in no time. 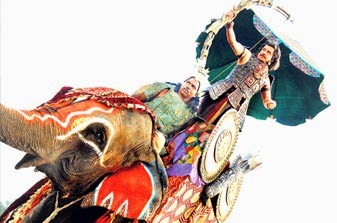 THIS THREAD IS DIVIDED INTO 3 PARTS :

###Here, Note-( 16 ) It's a kaurava named Karna. So its first proof of presence of Karna (Gandhari's son) in mahabharat. So there were 2 Karnas - Surya-putra Karna and Gandhari's son Karna.

B) Bhima attacked on Gandhari's son Karna In Bhishma parv :

-Suryaputra Karna already took vow not to fight under commandership of bhishma. So, He did not fight in bhishma parv.

Sacred-Text :
The mighty Bhima, beholding Dussasana and Durvisaha and Dussaha and Durmada and Jaya, and Jayasena and Vikarna and Chitrasena and Sudarsana, and Charuchitra and Suvarman and Duskarna and Karna, and many other mighty car-warriors, excited with rage, of the Dhartarashtra host near enough to himself, penetrated into (thy) mighty array that was protected by Bhishma in that battle.

- Description of Gandhari son karna as Kshatriya princes while going to fight with drupad.

Sacred-Text:
smiting the Panchalas on their way, laid siege to the capital of the great Drupada. And Duryodhana and Karna and the mighty Yuyutsu, and Duhsasana and Vikarna and Jalasandha and Sulochana,--these and many other foremost of KSHTRIYA PRINCES of great prowess, vied with one another in becoming the foremost in the attack.

### Here, See they warriors who went for guru dakshina all were KASHTRIYA PRINCE.

Sacred-Text :
"Then, O bull among the Bharatas, that mighty bowman, Karna, surrounded by a large army, besieged the beautiful city of Drupada. And he, after a hard conflict, brought the hero under subjection, and, O best of monarchs, made Drupada contribute silver and gold and gems, and also pay tribute. And, O foremost of kings, having subdued him, (Karna) brought under subjection those princes that were under him (Drupada) and made them pay tribute. "

Sacred-Text :
" Taking, then, another gold-decked bow that was new and strong, and drawing out of his quiver a strong, whetted, well-tempered, sharp and broad-headed arrow, and fixing it on his string, and carefully aiming it-at Drupada, he let it off with great force, inspiring all the Somakas with fear. That arrow, piercing through the breast of Drupada, fell on the surface of the earth. The king (of the Panchalas), then, thus pierced through with Vrishasena's arrow, swooned away. His driver, then, recollecting his own duty, bore him away from the field"