I found some massively stupid haters who said that Arjun could break Kavach Of Karna. LOL. This extraordinary knowledge of haters gave me ebola...Now I feel sympathy for such stupids who seems to be from another planet...
we will expose these funny people along with proof ...

THIS THREAD IS DIVIDED INTO 5 PARTS

PART-2 : OPINION OF KRISHNA ABOUT STRENGTH OF KAVACH-KUNDAL 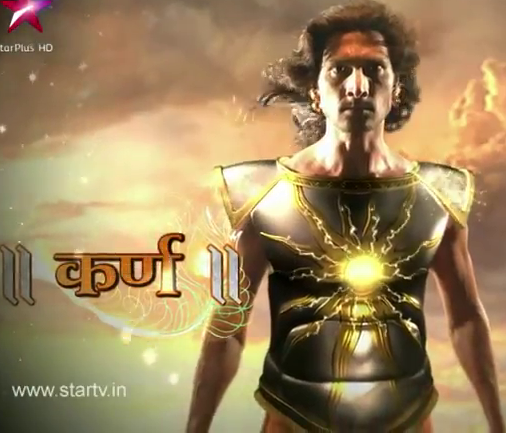 Kavach-Kundal of Karna were impenetrable. It was made up of AMRIT. All astra including Sudarshan chakra, Trident (Trishul), Pashupatastra, Brahmastra were totally INCAPABLE of penetrating the divne armour of Karna.

Sacred-Text :
(Lord Surya to Kunti)
Hearing these words of hers, Surya answered, 'O gentle maiden, thy son shall be mighty-armed and decked with ear-rings and a celestial coat of mail. And both his ear-rings and coat of mail will be made of Amrita, and his coat will also be invulnerable.

Sacred-Text:
(Krishna said to Arjuna)
Indeed, if that bull among men(Karna) had his armour and ear-rings, neither thyself, bending the Gandiva, nor myself, uplifting my discus, called Sudarsana, could vanquish him in battle.

******Here, See Krishna himself accepted it was IMPOSSIBLE to defeat Karna with his Kavach-Kundal.

During the Samudra manthan, the asura Rahu drank some of the amrita (divine nectar). The sun and moon realized it and alerted Mohini (the female avatar of Vishnu). Mohini cut off the asura's head before the nectar could pass his throat. The head, however, remained immortal due to the effect of amrita and became Rahu.

Sudarshan chakra is far SUPERIOR weapon than Pashupatastra. Its already proved that sudarshan could not penetrate Armour of Karna. Then where is ordinary pashupat of Arjuna against armour of Karna ? Nowhere...In Ramayan, Indrajeet Meghnaad also used pashupat astra against Laxmana but Pashupatastra failed..There was no destruction of three world..Even pashupat couldn't touch hair of Laxmana..LOL

Sacred-Text #1:
Yonder Karna urges forward the mighty car-warriors of the Dhartarashtras towards the son of Pritha (Yudhistira) with the weapons called Sthunakarna, Indrasjaha and Pasupata, and with clubs and other weapons.

Sacred-Text #2:
Duryodhana continued, "Having obtained all the celestial weapons and the boons that had been desired by him, Rama bowed unto Siva with his head. Obtaining the leave also of the gods that great ascetic went away. This is the old story that the rishi had recited. The descendant of Bhrigu gave the whole science of weapons unto the high-souled Karna, O tiger among kings with delighted heart. If Karna had any fault, O lord of Earth, the delighter of Bhrigu's race would never have given him his celestial weapons.

****Here, See Lord Parshuram got this 'Pashupatastra' from lord shiva & Lord shiva gave that to Karna.

Sacred-Text #1 :
When Drona failed to gain any ascendancy over the son of Pandu, the son of Bharadwaja, that warrior acquainted with the course of all weapons, invoked into existence the Aindra, the Pasupata, the Tvashtra,the Vayavya, and the Yamya weapons.


"Drona said, 'I know the Vedas with their six branches. I know also the science of human affairs. I am acquainted also with the Saiva weapon, and diverse other species of weapons.

***Here, See Drona himself accepted that he got all divine weapon from Lord Shiva

Sacred-Text:
(Lord Vishnu said to drona)
Narayana, assuming the from of a Brahmana, came to my father. Bowing unto him, my father presented his offerings unto him in due form. Taking them himself, the divine Lord offered to give him a boon. My father then solicited that supreme weapon called Narayana. The divine Lord, the foremost of all gods, addressing my sire, said, No man shall ever become thy equal in battle. This weapon, however, O Brahmana, should never be used in haste. It never comes back without effecting the destruction of the foe. I know none whom it may not slay, O lord! Indeed, It would slay even the unslayable. Then Lord Narayana, addressing myself also, said, 'With the aid of this weapon, thou too shalt pour diverse showers of celestial weapons in battle and blaze with energy in consequence of it.

*****Here, See Narayanastra was very destructive weapon. Even pashupatastra was nothing against it. There was NO counter to this weapon. If Ashwatthama wanted, he could have finished the war within few moments.

Sacred-Text:
Lord Siva fired several weapons at Krishna. But Krishna was able to neutralize all of them. Counteracting a Brahmaastra with Brahmastra, fire with water, wind with mountains, Siva's own Pasupatastra with Krishna's own Narayanastra, Krishna had an answer for all of Sivas arms.

*****Here, See Lord Krishna neutralised Pashupatastra by his own Narayanastra.

Sacred-Text:
(Krishna said to Arjuna)
O Partha, that the ruler of the Pragjyotishas got this weapon of mine. There is none, in all the world, O sire, including even Indra and Rudra, who is unslayable by this weapon.

Some psycho Arjun fans may say that Arjuna killed Nivatkavach who was blessed by bramha with invisible armour that's why he could break Kavach of Karna. What a joke.

a) Bramha's Kavach was not made up of AMRIT like the Kavach of Karna.

b) Arjuna broke that Kavach of Nivatkavach just by using bramhastra which is the weakest weapon of Brahma.

c) In Ramayana, Laxman also broke the armour of Atikaya(Son of Ravan) by using bramhastra.

The excellent arrows could not inflict injury to Atikaya in the battle. Wind god coming near Lakshmana told him that Atikaya with a boon bestowed by Lord Brahma is wearing an impenetrable armour.
Wind god told Lakshmana to pierce Atikaya by a missile presided over by Lord Brahma since he cannot be killed by any otherwise, since the mighty Atikaya protected by the armour is incapable of being killed with other missiles.

******Here, See bramha's armour was very weak who was broken by normal bramhastra. If Karna fought with Nivatkavach then Karna could also easily break the brahma's kavach by using brahmastra.

CONCLUSION :
1) The Kavach-kundal of Karna were made up of AMRIT thats why it was impenetrable

2) All weapons including Sudarshan chakra, Trident, Bramhastra, Pashupatastra, Bramhshir were totally FAILED against Kavach-Kundal Of Karna.